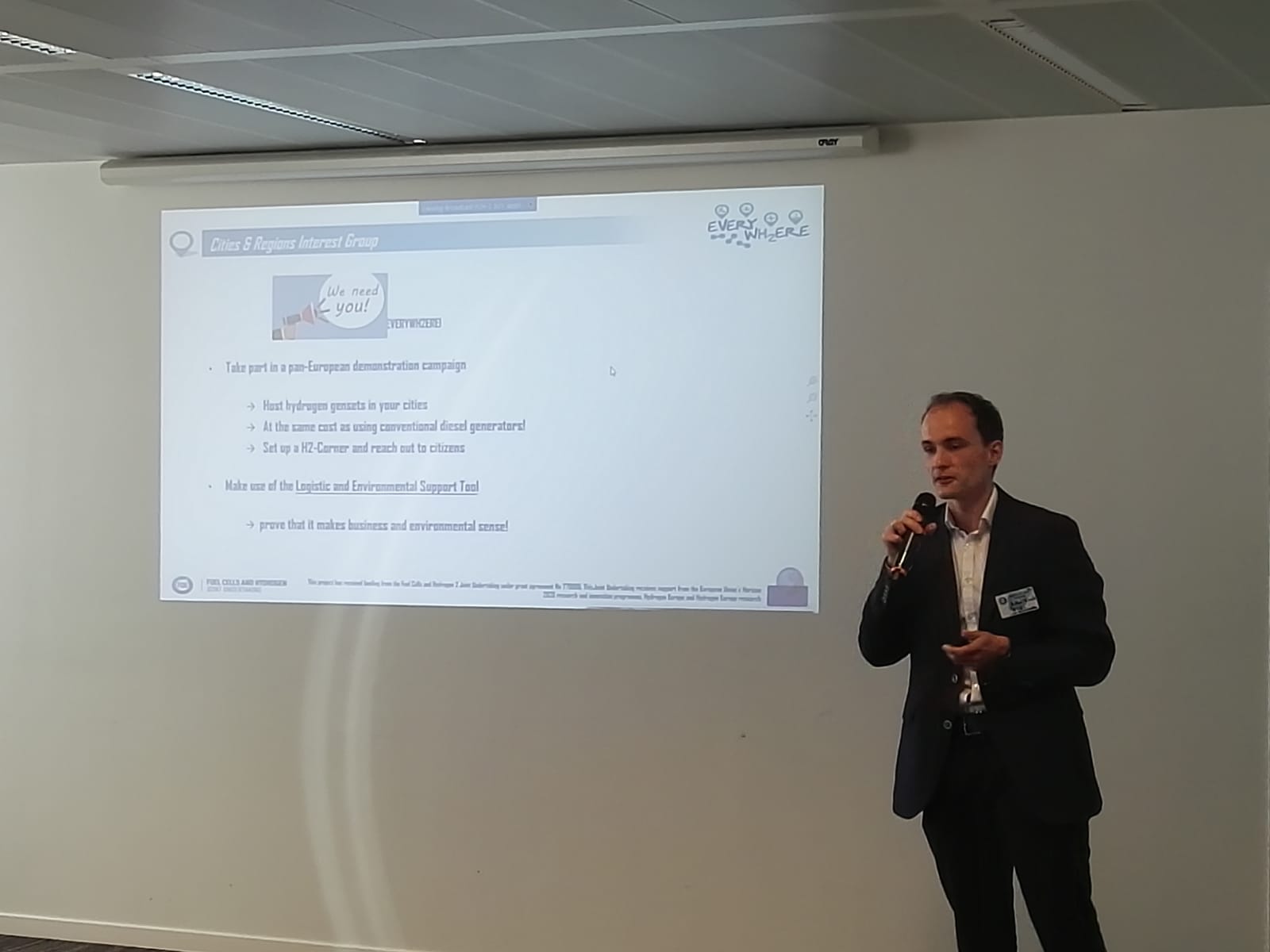 The Everywh2ere project participated at the 8th General Assembly of the Regions and Cities Initiative, which took place  the 9 October 2018 at the FCH JU’s premises in Brussels.

Our partner from ICLEI could promote the project during the FCH JU Regions & Cities Initiative. This  meeting was a success and the project generate quite some interest from city and industry partners alike.

The project will continue to reach out to local governments to get the Cities Interest Group going.

Critical time for regions and cities

With applications ranging from transport to energy storage on the cusp of commercialisation across Europe, and ‘green’ hydrogen, produced from renewable energy, showing huge potential for reducing greenhouse gas (GHG) emissions, hydrogen could become an integral part of local and regional authorities’ decarbonisation plans.

Bart Biebuyck, FCH JU Executive Director, welcomed the participants and underlined that this is a critical time for the regions and cities to come forward and accelerate their plans for investing in and deploying the Fuel Cells and Hydrogen technologies, which can help them realise their emission reduction targets and improve local air quality.

The event was an opportunity to present the newest FCH JU study: “Fuel Cells and Hydrogen for Green Energy in European Cities and Regions”, which shows among others that:

European cities can become living lab for the demonstration of Fuel cell and hydrogen technologies, starting from their use in niche, but everyday applications such as temporary gensets that are used in construction sites, music festivals and temporary events. .Leveraging EU excellent knowledge from consortium partners in FC application for automotive and telecom backup power solutions, EVERYWH2ERE project will integrate already demonstrated robust PEMFC stacks and low weight intrinsecallty safe pressurized hydrogen technologies into easy to install, easy to transport FC based transportable gensets. 8 FC containerd “plug and play”gensets will be realized and tested through a pan-European demonstration campaign in a demonstration to market approach.The prototypes will be tested in construction sites, music festivals and urban public events all around Europe, demonstrating their flexibility and their.enlarged lifetime. Demonstration results will be capitalized towards the redaction of three replicability studies for the use of the gensets in new contexts (emergency and reconstruction sites, ships cold ironing in harbors, mining industrial sites) and for the definition of a commercial roadmap and suitable business model for the complete marketability of the gensets within 2025. A detailed logistic and environmental analysis will be performed in order to study the complete techno-economic viability of the gensets and a decision support tool will be realized to support end-users in future replicability. According to the crucial role of cities to promote through policies and dedicated regulatory framework the spreading of FC gensets, local authorities will be involved in the project since its beginning. A strong dissemination and communication campaign will be conducted particularly during “demonstration events” (more than 25 festivals involved) in order to increase public audience awareness about FCH technologies.
Latest Projects
Tags
C/O Pop Convention climatechange FCHJU General Assembly gensets Goterborg greendeal Green Music Awards hydrogen sustainability
Read Previous

ENVIPARK AND RINA IN COLOGNE FOR THE EVERYWH2ERE PROJECT